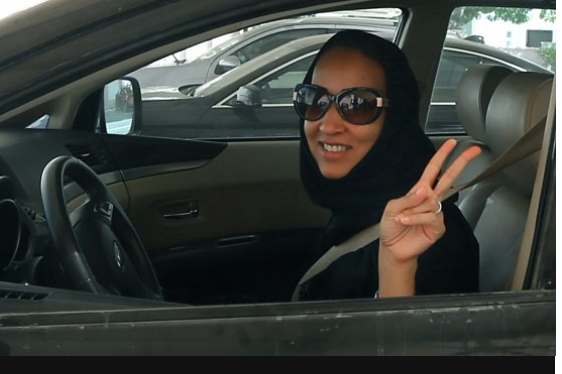 and get behind your wheels of choice

I am different, yet we are the same.

Please, do not lump me in a category

because you lack awareness.

Please, see me as an individual

with ideas and thoughts of my own.

Please, do not build a wall

to keep me in or keep me out because of your fear.

Instead, keep the Gate open

and your arms outstretched.

Accept me, and together

we will build a better world. 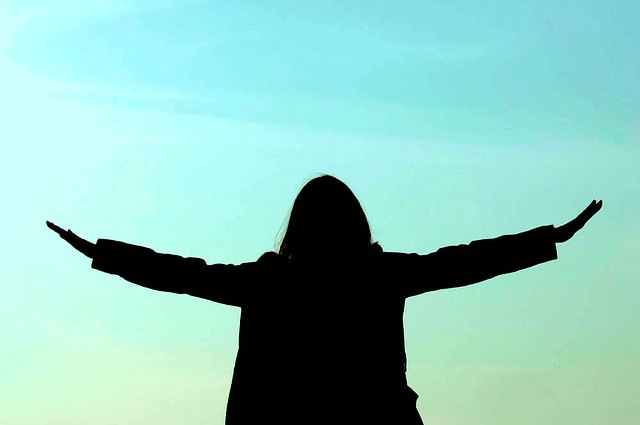 “Meta,” Lillie said, her voice soft, as usual. “We have something for you, too.” She nudged Sassy Sarah.

“Sorry it’s not wrapped.” Sassy pulled the item from her lap and presented Meta with a comb carved with ivory roses.

My girls. Their thoughtfulness overwhelmed me. They remained dry-eyed. Maybe too leather-skinned from hard lives to soften now. Some day, perhaps.

Meta shook her head as she placed the hair ornament inside the box. “Thank you,” she whispered.

“Well, missy.” Reba shook her head. “You sure picked a fine time to come to the big city.”

“I seen doozies of trouble in my day. Most is harder to pull off than ticks. Best thing? Meeting Fannie Porter. Worst? All them days before.” Reba draped a handmade amulet necklace around Meta’s neck. “For good luck.”

Meta didn’t ask what concoction Reba had put inside the amulet. Instead, she curled her fingers around the necklace then stood to hug Reba.

Reba and I had been worried about Meta after the shooting. Unlike my girls, Meta came from a simple, pleasant life. When she came to San Antone, she had seen the hardscrabble side and had proven herself a survivor.

Meta sat quietly, skimming her fingertips across the tabletop.

“What you thinking, girlie?” Reba said.

Meta let loose a wide grin and glanced at each of us. “So many secrets engrained in this wood. If only it could talk.”

We all cackled like a bunch of old women at a quilting bee and that image made me shiver. 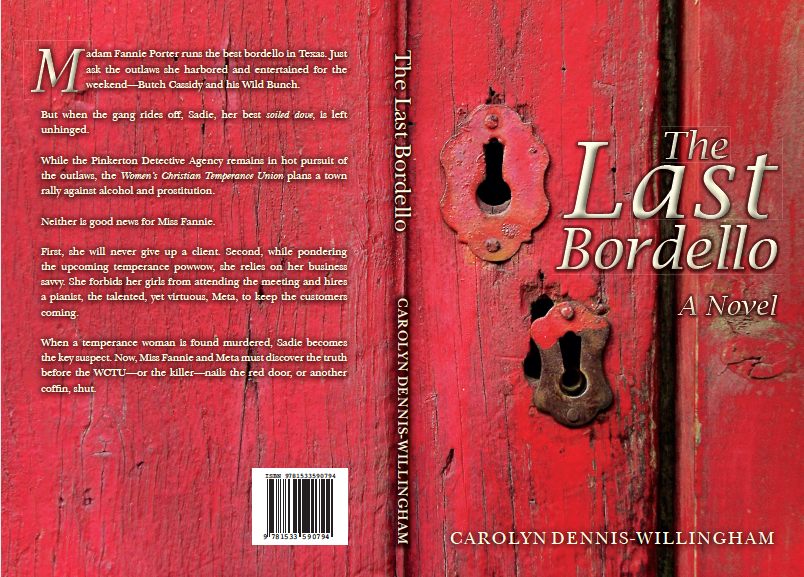 excerpt from The Last Bordello

The overpowering Scent of bordello perfume vanished, extinguished by something more powerful. The home was spiced with the bonding of women—a fragrant bouquet of friendship. It occurred to me then. I had condemned and convicted others without true knowledge. I vowed not to make that mistake again. 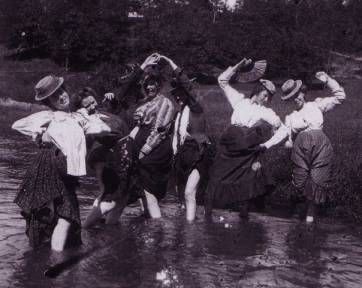 Excerpt from The Last Bordello

Once again, my sister has come through. (And wait for the “punchline!”)

Pat bought me the perfect gift for Christmas. (She has read my historical fiction novels, the last one set in 1901.) Upon closer inspection, it became even better! 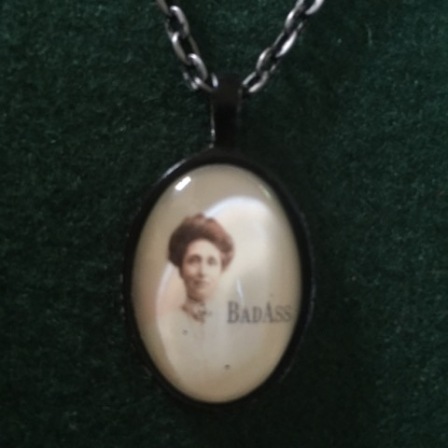 (1901) Meta learns, while attending the Women’s Christian Temperance Union rally, that soiled dove Sadie has snuck out of the bordello and is hiding in the background. As Meta listens to the speakers advocating for women’s rights, and the men become angry at the progressive words, something unexpected happens. 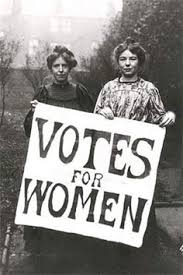 Excerpts from The Last Bordello,  Chapter 28: Eggs of Folly

“Due to the efforts of the WCTU, the age of consent has been raised from thirteen to fifteen. We strive for even higher,” Miss Fisher <Minnie Fisher Cunningham, Women’s Right Activist> said. “Every day, the newspapers report acts of violence against women and remind us of men’s incapacity to cope successfully with this monster evil of society.”

“What are you saying, missy? We men ain’t capable?” The man’s words elicited angry comments from the crowd.

Miss Fisher hesitated before she continued. “We know you men are hardworking gentlemen. For women, education is the key, both in and out of the home.”

Some women clapped. Others squinted in puzzlement as if the thought of learning something other than child-rearing had never occurred to them. Her words enlightened me and affirmed my goals.

A man, close to the front, pumped his fist. “My wife don’t have time for more learning. We got six kids needing supper on the table.”

“Why do women prostitute themselves to the abnormal passion of man?” Miss Fisher continued. “Because they are poverty-stricken, destitute above temptation, and driven by necessity. They sell themselves, in marriage or out, for bread and shelter, for the necessities of life. How can we blame them? They have no other recourse but to live in a society that dictates what they—we—can and cannot do. To solve this problem, we demand that women be allowed to exercise their inherent, personal, citizen’s right to be a voice in the government—municipal, state, and national. Then, women will have the power to protect themselves.”

“We men protect our women just fine,” a man shouted. Other men yelled their agreement.

Mayor Hicks stepped to the podium, his lips pursed. “Enough of your heckling. Save your disagreements for editorials in the newspapers. She has a right to free speech.”

“So do we,” someone yelled back.

The mayor banged a fist on the podium. “These women are invited guests. By God, we will show them our Southern hospitality.”

The raw egg came from nowhere. It narrowly missed the mayor’s head before landing on the bandstand floor. He squinted, scouring the crowd.

Poor Mrs. Fenwick held a shaky hand over her mouth.

Miss Fisher reached below the dais and pulled out a speaking trumpet. “The true relation of the sexes can never be attained until women are free and equal with men,” she said, her determination thundering above the chaos.

The second egg hit the podium dead center. The crowd either gasped or laughed. Some men took hold of their wives and scurried them away, while the women in black remained steadfast in their chairs behind the podium.

…  The yolk running down the front of the dais did not deter Miss Fisher. She stood firm, her voice amplified by the speaking trumpet. “As the great Susan B. Anthony said, whoever controls work and wages, controls morals. Independence is freedom. Independence means happiness. Therefore, we must have women employers, superintendents, legislators. For moral necessity, we must emancipate women, pull them out of prostitution, and safeguard our country. Thank you.”

photo used to make the point!

Reba returned to the stove, hissing like her frying bacon.

My temples throbbed. If the ache continued, I’d have to take a spoonful of that sorry laudanum and tuck myself in bed. “Now, I have to figure what to do. You have put me in a terrible situation. The girls know you betrayed my trust. We have rules in this house, and by God, girls in my establishment will Abide by them. How can I possibly let you get away with this?”

Quiet now, Sadie crossed her arms and laid her head on her forearms. Her shoulders quivered a silent shrug.

Reba shook her head. “Thinks I’m about to have another sighting, Miss Fannie. It’s starting to tell me something’s fixin’ to change around here.”

It didn’t hurt for Reba to season the disobedient girl with the fear of being fired and turned back out on the streets.

(excerpt from The Last Bordello)

Greta, one of Sadie’s fellow prostitutes at the bordello, tries to comfort her after they learn members of the Women’s Christian Temperance Union are coming to town to Protest against vice. (From The Last Bordello) 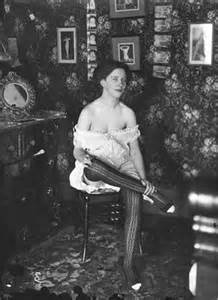 Greta put an arm around Sadie. “I love you truly, truly, dear,” she sang.

“Stop it!” Sadie unclenched her fists long enough to wallop her palms on the table. “Your piping doesn’t help.”

Greta puffed her cheeks and blew out a huff. She placed her hands around her throat. “Geez, kill me now. You’re actin’ like you been slurpin’ asshole soup again.”

“Hypocrites, all of them.” Sadie’s face reddened. “Those protesters make me sick. Religious fanatics who can’t mind their own damn business, preach like they’re better than us.”

Her last comment, barely a whisper, I knew Sadie was thinking about her religious nut of a mother. She rarely spoke of her, but when she did, she referred to her as Lucinda the Lucifer. The woman had forced Sadie to recite Bible passages before allowing her to eat and preached the sin of men’s unbridled passion until her ears burned. Who wouldn’t run away after that kind of upbringing? 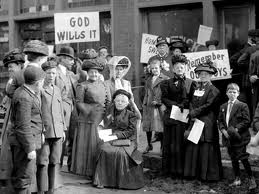