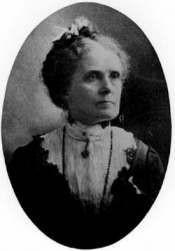 Mrs. Stoddard scanned the crowd. Some listened while others talked among themselves, paying no attention to her whatsoever.

“I grieve with you, citizens of San Antonio. One woman from your San Antonio Women’s Club continues to grieve for her husband, who fell to his death while drunk. Another woman is dead by the hands of her husband, the owner of a saloon. His only defense? ‘I was drunk. I didn’t know what I was doing.’”

Someone yelled, “Drink or not, Carl’s a louse. Never takes me on credit.” The woman next to him punched his arm.

“Who will be next?” Mrs. Stoddard continued. “Will it be your daughter, still in her youth, whose face will feel the wrath of a hand that has held too many whiskeys? Will it be your mother, your sister, or your aunt who will have the misfortune to be associated with a drunkard? Will the man stumble down the stairs of his home and find an innocent target? Point the edge of his knife to her throat? Will she be pummeled by a fist, discarded like a mere piece of garbage?”

“Maybe she weren’t so innocent.” The man, close to the front, laughed. A few others joined his guffaw.

“In the words of the great Elizabeth Cady Stanton, ‘Reformers from all sides claim for themselves a higher position than the church. Our God is a God of justice, mercy, and truth. Their God sanctions violence, oppression, and wine-bibbing, and winks at gross moral delinquencies. Our Bible commands us to love our enemies, to  Resist evil, to break every yoke, and let the oppressed go free…In our creed, it is a sin to hold a slave, to hang a man on the gallows, to make war on defenseless nations, or to sell rum to a weak brother and rob the widow and the orphan of a protector and a home.’”

I turned my back to the bandstand. It was dark now, but the gas lampposts provided enough light to see a shadowy figure behind a cluster of trees twenty feet behind me.

“I’ll be right back, Aunt Amelia. I want to check on something.”

If Sadie was still there, I didn’t want to scare her away. Trying to be inconspicuous, I inched to the left of the tree and then slipped behind it. “Sadie?”

Excerpt from The Last Bordello