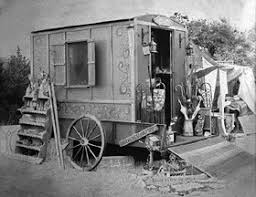 Hardly Saddler’s rolled up his wagon, pitched a tent and started up his Medicine Show. He told us about his elixirs and about how, if we bought them, they could treat most of our ailments. If he had an elixir for meanness, I would have bought a bottle right then and there, mixed it into a Pearl beer and taken it straight home to Dad.

Hardley Saddler had all kinds of shows to see and games to play. One of them was a contest to see who could hammer their one big nail the fastest into the wooden board. This contest was only open to girls, since there were other contests open for boys.

“Hey, look who’s enterin’ the contest,” Dorothy says , spitting a watermelon seed at my face. I spit one back and see Aunt Nolie and Genevieve, Dorothy’s sister, step up to the boards.

Besides Aunt Nolie and Genevieve, there were five other ladies lined up at the board. The whistle blew and there they were, those gals pounding their nails in such a hurry you would have thought they were putting up a church roof to keep Jesus dry before a storm. We were all cheering and a hollering for our favorite girl and wouldn’t you know it? I was still picturing Freezer’s eyeballs twitching and Aunt Nolie hammering something else.

Aunt Nolie got real close to winning, her face just dripping with girl sweat. But Genevieve slammed that nail in quicker than a racehorse coming out the gate.

After Genevieve was declared the winner, I couldn’t believe what the first prize was. Genevieve had won herself a brand new, over-the-knee fur coat. Even the folks who had rooted for someone else to win were hooting and clapping that at least one person in Rotan owned a new fur coat.

The next morning  peeked out the window and saw Lottie, Genevieve’s mother, standing outside her cabin, a cigarette dangling from her bottom lip, her bare feet in the snow. She looked over and waved to me like she does every morning. But on this particular day, she waved like she was the Queen of England except she was wearing nothing but a toothless grin and a brand new over-the-knee fur coat.

Ain’t that a pisser?

A true story from No Hill for a Stepper.

4 thoughts on “Toothless in a Fur Coat”