Will you deny me the right to talk about our right to “bear arms?”

I believe the first big mistake politicians made was the coining of the word “gun control.” No one wants to be “controlled”.

What if our politicians had, instead, talked about gun safety? Maybe NRA members wouldn’t have balked. Perhaps, even they would have been open to listening instead of simply reciting the second amendment.

The right to bear arms, adopted into the U.S. Constitution in 1791, evolved from the Revolutionary War experience when colonists needed to fight for their liberty.

It took the shooter in Las Vegas between 9 and 11 minutes to kill 59 people and injury over 500 people. The shooter had put “bump stocks” on his rifles which had turned them into fully automatic machine guns. How did he get bump stocks? From his local gun store? And why would any civilian need this kind of weapon? To mow town a herd of cattle for his Sunday dinner?

Come on, politicians! Stop saying, “yes, we’ll talk about gun control.” But when? After the next shooting or the one after that?

Yes, America has the right to bear arms. But I don’t think the bears like it much. They need their arms to climb trees. 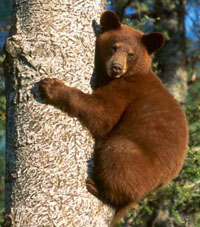 Come on, America! If we have the right to bear arms, can we at least climb higher on a safer tree??