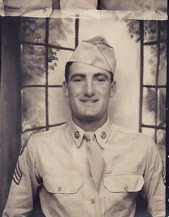 Shortly after arriving in San Antone, I went to town and bought some switchblades, knucks, and other crap that I thought I could sell for a profit to those little green-behind-the-ear boys who were still thinking about sucking on their mothers’ tits. I went into our classroom and when the instructor wasn’t around, I sold everything I’d bought and for a good profit too. I even told those boys that if they needed help knowing how to use those weapons just to let me know and I’d teach them, for a little fee of course.

About a day later, some fella came in and said, “Dennis, the lieutenant wants to see you.” I walk in and salute, and he says, “Soldier, what were you doing selling those knives and and knuckles?”

I had to think real quick-like so I said, “Sir, I didn’t want ’em anymore, didn’t need ’em anymore. I just wanted to get rid of them.”

He sized me up better than I could’ve done myself, smiled, and said, “I don’t want to ever see you in here again.”

“No sir,” I said, and I haven’t seen him since. But it didn’t stop me from still wanting to do something extra on the other side of the army air force paycheck. Before long, another opportunity invited itself over. I was made responsible for mashing the Brass cans that bombardier and pilot wings come in I looked in them before I started mashing them, and I’ll be damned if there still weren’t wings stuck to the bottom of some of those cans.

I looked in every one of those cans with the eye of a person who had starved before, who had tasted hunger, but had learned to keep it as a memory pinched between cheek and gum like chewing tobacco. I plucked those pins out and shined them up real good with a blitz cloth until they looked brand new. I took them to class and, again, when the instructor wasn’t around I asked, “Who wants to be a bombardier? A pilot?”

I remember Dad telling me a long time ago that if a girl sees something shiny, she’d just have to go over and touch it. So I knew it really didn’t matter if they wanted to be a pilot or bombardier. What mattered to those boys was going out for a little R & R, because if girls got sight of those shiny pins those boys would be happy for a whole night and maybe more. Now that I think on it, I should have sold them for more than a dollar a piece.

I also knew that a unit of boys were about to be shipped over to Japan. I bought all the fake diamond rings I could find at the five-and-dime store, went back to the barracks and told those boys the same thing. Today, thanks to me, I bet there’s a lot of gals over in the Pacific wearing fake rings on their fingers.

No more onion soup for this man. The money in my pocket is finally mine. Pulling out my wallet I count twenty dollars and change. Nobody’s stealing this money from me.

Excerpt from No Hill for a Stepper